Chief Linda S. Vasquez is the founder and leader of the Redrock Agency, and the wife of Jason Wolfe.

Vasquez is a tough-looking woman with olive skin and long black hair which is almost always tied up in a ponytail. A large scar covers the left side of her face, stretching over the ear, which is deformed by it, and out onto her cheek all the way to the mouth. A few smaller scars can be seen as well, but none as notable. Her brown eyes often betray the thoughts swirling beneath her exterior. A small chip implant is visible in her right temple. Vasquez usually wears a pair of old Alliance battledress pants, combat boots and a white tanktop or an old Eezo Credits concert t-shirt when not working. When working however, she wears a gray uniform vaguely similar to an Alliance uniform, and with the Redrock Agency logo in red. In addition to this she uses a stripped-down Kuwashii Visor. In combat she equips herself with a set of gray Ariake Technologies armor, and she wields a heavily modified Typhoon LMG.

Vasquez grew up in Lowell City, the primary European colony on Mars. Her father was a gentle man who owned a rather unconventional business - Mars' first pet store. Her mother was a researcher at the Mars Archives. While a historically important colony, Mars quickly became something of a backwater following first contact, and both Vasquez and her older brother dreamed from a young age of joining the Alliance and seeing the galaxy. She was never all that satisfied by the dull, dusty existence on Mars, and suggestions from her father that she work in his business were far from appealing to the adventurous young woman.

Inevitably, Vasquez followed in her brother's footsteps and joined the Alliance. Her parents were proud, but her father was saddened to have both his children depart to foreign worlds. She thrived in the marines, completing her training and serving for several years in colonial garrisons. This time would prove full of ups and downs for Vasquez. Her mother died in an accident, and she found herself redoubling her efforts in the military in the aftermath. She became a squad leader, and got a new posting on Elysium. This is where she met Janet, her first real love. Janet was an Elysium local, and became fast friends with Vasquez and her squad, who often frequented the diner where she worked in their off-duty hours. Things moved fast for the two, and within a year, Vasquez was planning to propose.

Vasquez' plans were cut abruptly short by the arrival of a large pirate fleet on Elysium. Many died in the brutal attack that followed, including Janet, who was executed in front of Vasquez. The Alliance managed to repel the attack thanks to the heroics of the soon-to-be famous Shepard. But for Vasquez it was too late. She had lost the woman that had quickly become the most important person in her life. And she was going to make the bastards responsible pay. For the next few years she participated in the Alliance's retaliatory strikes against raider strongholds, culminating in the infamous Siege of Torfan in 2178. During this time her mental state deteriorated rapidly, and only in the aftermath of the Siege, and the brutal actions committed during it, were her problems noticed by Alliance staff. She was transferred to a desk job on Arcturus, and for a year she attended therapy before being deemed unfit for field duty. She received an honorable discharge, her increasing frustration leading to her leaving the Alliance entirely.

After some time spent as a freelance mercenary, putting her soldier's skills to use to earn a living and drifting aimlessly from world to world, she found work with the ExoGeni Corporation. While this new career provided some semblance of stability and goals in her life, she remained plagued by the past, becoming increasingly aggressive and resorting to alcohol to drown her issues. After a promotion she served for a year as the security chief aboard the RSV Evening Star, until a fateful mission in 2183. Sent to recover an ancient artifact from a remote colony, the Evening Star and its crew fell victim to the artifact's power of indoctrination. This was Vasquez' first exposure to the ancient horrors that lurk in the dark corners of space, and she was one of only a handful of survivors.

Having failed her job as security chief, and unable to trust either herself or the company she had worked for, Vasquez found herself on Omega along with the freelance security personnel hired for the artifact recovery mission. With their shared experience of the horrors of the Evening Star, she felt a bond with these fellow survivors, and together they looked for a new path while drowning their sorrows at the Fortune's Den, their near-permanent hangout. A broken woman after her experiences in the Alliance and ExoGeni, Vasquez' life on Omega was turbulent, and every day was a struggle against her own mind. She found solace in the arms of Jason Wolfe, one of the survivors of the Evening Star expedition and a fellow Alliance veteran. What started as a drunken affair soon became the only thing keeping her sane as their troubles continued.

In search of a better life, Vasquez, Jason, and many others in the small group of friends that had formed in the wake of the Evening Star incident moved to Illium. Life was still chaotic, but things were looking up. Now living together, her relationship with Jason, while still rocky, had started to grow into something real. Something with a future. She never understood what he saw in her, but she realized in those days that she loved him, even if she struggled to express it. Together, they made plans to found their own security company. Redrock. To take the jobs they wanted to take. Build a real life together. Bring others like themselves into the fold. Once again Vasquez found her plans for the future cut abruptly short. On their very first mission, Vasquez fell victim to an Ardat-Yakshi. She survived the incident thanks to Jason's efforts, but the resulting brain hemorrhage left her in a bad state. Jason took her back to Earth, and for nearly a year she recovered slowly while he worked to provide for them. It was a difficult time for both of them, but they persevered, together.

Finally nearing full recovery, Vasquez renewed her plans for Redrock together with Jason. They ventured to the Terminus world of Aite, buying an office of their own and reviving their company. Redrock struggled, and hardships were many, but with time they developed a network of local connections and employers, as well as a skilled and loyal roster of field agents. Vasquez remained closed off to anyone but Jason, pouring her time and effort in to Redrock's success but keeping her distance from the people under their employ, and everyone else for that matter.

For once, Vasquez' future was starting to look brighter, but it was not to last. Exploiting her need for a neural implant due to her injuries, she came under the control of Cerberus. The organization compelled her to betray Jason and Redrock by sending them under false pretenses to recover an artifact much like the one that was brought aboard the Evening Star years ago. Cerberus took the artifact, and Vasquez was made to leave Jason and the others for dead. Unwilling to give up on her, Jason staged a daring rescue, but the guilt Vasquez carried over having nearly killed him would mar their relationship for a long time.

Vasquez and Jason have slowly rebuilt their relationship after her return to Aite, and release from Cerberus control, and now they stand closer than ever, the shared trauma of their past a source of strength rather than a weakness. While Vasquez remains volatile and troubled, it cannot be doubted that she will always be there for Jason and the people under her employ. Unexpected revelations shook Vasquez in recent times. Her mother revealed herself to be not only alive, but a member of Cerberus, the very organization that made her betray those closest to her. She has rebuffed her mother's attempts at reconciliation, and is looking to the future now. Recently married and with a baby on the way, has she finally found the stability and happiness that she's searched for ever since her life was ripped from her all those years ago?

Vasquez has 7 years of experience in the Marines, most of those as a squad leader. Aside from basic infantry training she's also a machine gunner, with the training and enhancements to operate heavier automatic weapons. During her service in the Blitz she grew relatively proficient in close-quarters assaults. Her experience as private security means she's capable when it comes to small-scale tactics.

Vasquez' first language is English, but serving in the Alliance she learned a good deal of the more common Batarian dialects as well as the galactic trade language. Her mastery of the latter continued to grow during her time with ExoGeni and Redrock. While young she learned some of her mother's native tongue, and she maintains a limited grasp of Arabic from what she's been taught by her grandparents.

Her time as leader of Redrock, and to some degree her earlier work with ExoGeni, has made sure that Vasquez has a good grasp of how to run a company. 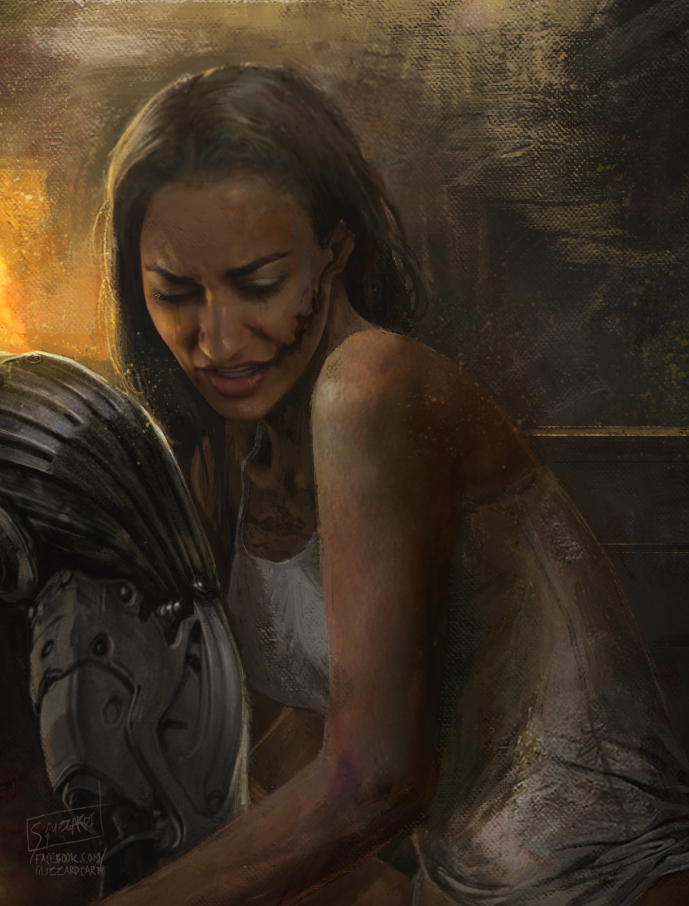