From AiteRP Wiki
(Redirected from Respite)
Jump to: navigation, search

The Miner's Respite is a bar, restaurant and inn located at the northern edge of the main commercial district of Freedom Falls, which puts it near the middle of the city. It has changed hands twice since being built, and is currently owned by Aylena D'Inea.

The outside of the building is of a human construction style with a concrete foundation, stone brick walls on the first floor, and yellow wooden walls above. On top is a gently sloped wavy steel roof. The building has a cut diagonal corner where the entrance is. The front door is primarily of glass with the VI watching it to prevent it opening for people clearly just passing by and above it, is a sign reading, 'Bar, Restaurant & Lodging'

There is a parking lot along the southern wall and the western wall by the garage. The latter is always kept clear enough for deliveries and so that Aylena can leave. There are security cameras on display along the walls outside, but there are certainly blind spots that can be exploited to get on the roof 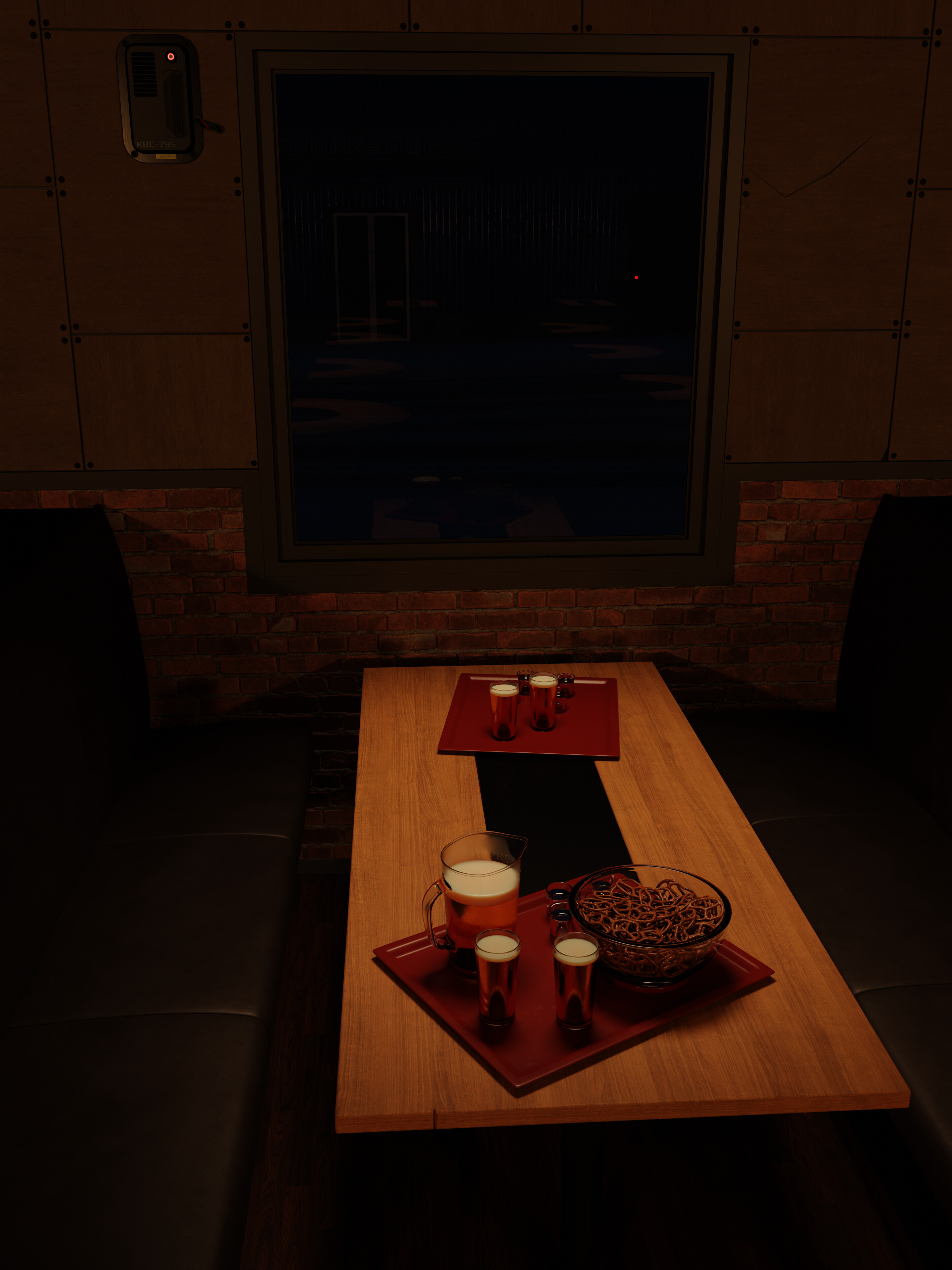 Taking up the majority of the first floor is the bar itself. The center of the room is dense with round tables to weave between and booths line the three walls to the left, immediate right and right. The bar is on the last wall, a row of stools in front of it. The room is lit by ceiling lights with a holographic projection of a chandelier that has hung there since the first owners put it up decades ago.

Behind the bar are shelves containing rows of drinks and mixing ingredients, some recognizable enough to serve as the place's drinks menu. Higher up are screens showing the menu as well as local or galactic broadcasts. There are usually one or two bartenders working there. The drinks choice is anything from cheap locally brewed beer to expensive imports.

Upstairs is a circular corridor going around a central shared space with a kitchen. Along the outer edge are the rooms. The kitchen is basic, but is required for any cooking or heating. Guests staying there short term – or have the credits – opts to go downstairs and out into town to eat instead.

The Respite doesn't have many rooms, but each is well furnished. They contain a bed, a desk and mini-fridge. The medium rooms also have a couch, while the largest ones have both a couch and a table.

The prices are competitive, but are very bad for long term stays. Aylena wants the payment upfront. The prices in parentheses are for 5 days if all five days are paid ahead of time.

The security system – which also doubles for tracking tabs – is fairly extensive. There are cameras in most rooms aside from Aylena's apartment and an array of microphones at the bar makes pinning a voice on a face reliable. The installation of that was done in the months after Aylena took over the establishment, but beyond that, little is known about who installed it.

Redrock Agency provides the security for the establishment, and have done so since shortly after their founding.

After the last incident, they post two security guards, one in the morning and afternoon and one in the busier hours of the evening. This is a temporary arrangement that is likely to change after Aylena's court cause.

The first owners of the establishment were humans that worked in the local mines but left due to disagreements. They still had friends within the line of work, and it was them they had in mind when the establishment stood finished in the early fall of 2168. The colony's immense growth also helped things along.

Aylena took over the bar in October 2184 with little fanfare or announcement leaving few regulars scratching their heads. However, for the first few months, things were calm and her behind the counter did not lead to a lot of change in the service or menu.